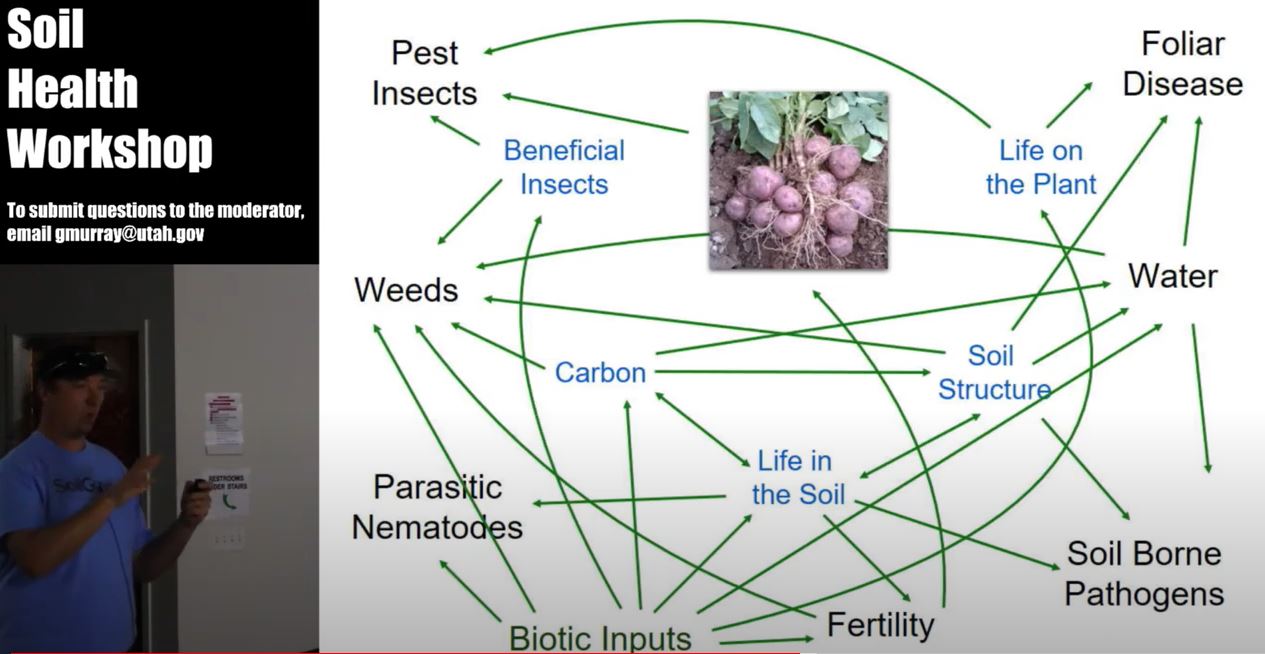 Brendan is a farmer. That’s the full extent of how he introduces himself. It is also why I like listening to him – he’s doing this stuff, with his own skin in the game.

The punchline of Brendan’s presentation is that he is replacing a system dominated by death with a system dominated by life. As a “biotic farmer” (his term), this means he is pro-biotic, not anti-biotic. It means improving the soil structure with living cover crops. It means controlling pests that live both above and below the soil surface with living beneficial insects, using living cover-crops and companion plants to support those beneficial, and having healthy crops that are more immune to pests. All this has meant that he has a farm that is just as productive as ever, but has a way lower input costs structure. And it’s a place people want to be. He is up front that not everything has worked and that he is not free from issues, but he is pretty confident he’s found a better way.

The rest of this post will focus on how Brendan’s ideas could be applied to Swedish sugar beet production. He doesn’t grow beets – the focus is more on spuds (“potatoes” for those of you who speak English), and the extrapolations are mine. The insights are not well developed, but they add to the growing circumstantial evidence that there is a solid reduced disturbance and chemical/ future for sugar beet production.

No surprises here, but the focus was on beneficials. There was a little surprise that he included fungi on the list. There wasn’t a lot to take away, although the 1:1700 ratio looks like something to follow up on. It’s something to do with the ratio of pests to beneficials.

Before they had a focus on building soil structure, the farm had issues with patches in fields that their irrigation equipment would sink in. There was also poor infiltration. After, the sinking feeling has left and they can access the fields all the time. Water use efficiency shot up. All this success is attributed to better soil structure. A lot of this success in building the soil structure is attributed to cover crops. For me, I can’t help but return to precision ag, strip tillage, and robotics. A good seed bed is very attractive for sugar beets – the seed is expensive and pretty good at staggering germination if the conditions aren’t right. Also, all that tillage is good for weed suppression, and for warming the soils. But do we really need to till 100% of the field when only 0.1% is in contact with a seed? Strip tillage would reduce the tillage by 50% (Soil Warrior has been used for sugar beets in the US, and it seems to have been discussed a bit a decade ago in Europe eg1, eg2). This would probably be enough to give much greater access the field after a wet period, increasing the chances of hitting the target sowing date. It would have to reduce erosion. On erosion, we already see people under sowing sugar beets with spring barley to reduce wind erosion (the barley is easily sprayed out later), but why can’t we just use something that is already there (maybe mow it a bit to let the light in)? Why stop at 50%. There are already very precise technologies out weeding fields, so it should be possible to get below 50% tillage. Even old skol/ non-RTK row-hoes manages to cover 50% of the field without widespread devastation.

With all this cover, the soils might be a bit colder, but they would probably also hold more moisture, so you’d expect less multi-generation germination. The soils might even be warmer at times, say when that cold snap comes in during the second week of April, owing to more cover keeping the warmth in. Cover crops can also provide good habitats to pests, so that needs to be considered – is it just that we see issues with cover crops because we haven’t given time for the beneficials to build up, or would this be a sustained problem?

I’m still unsure how we deal with the harvest end of the system… Hang on, robots?!

One more thing Brendan said about good soil structure – isn’t not just about water, but also gas exchange. You need the pores to allow the CO2 to escape and ensure a good aerobic envronment.

The weeds are still there. Some are seen less of as weeds now, given they are good for attracting beneficials. Others are new – there has been an shift in the weed species on their farm to species that indicate healthy soils.

The cover crops he uses took a lot of trial and error to get as right as they are. One thing that has driven this development is the different roles these crops can play in the system. For example, buckwheat is good for P mobilisation, radishes for N scavenging and deep tillage, millet for nematode supression. This isn’t new/s, but something that we probably need more thought around when it comes to cover crops before sugar beets (which is when they are most likely to be used in the rotation).