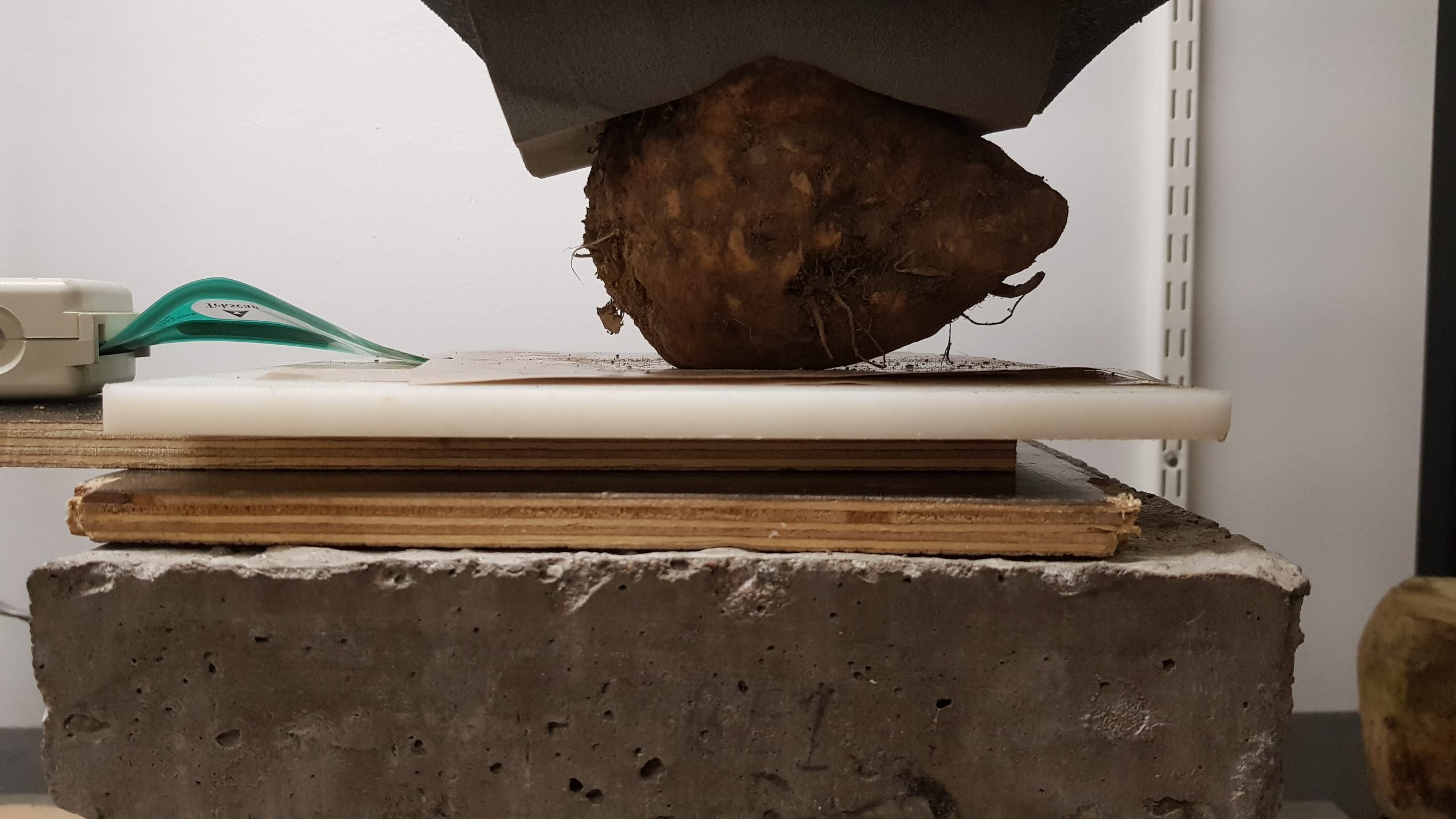 Yes, I do amuse myself…

But seriously, this has been a fun set of experiments.

Damage to sugar beets during harvest and transport can be very costly in terms of sugar loss during storage. This general idea is something that seems to be pretty well understood. The depth of knowledge on the different conditions that lead to different levels of damage, and how this varies between varieties, is mixed. For some conditions the knowledge is widespread, if not well codified; colder beets suffer more damage than warmer ones, higher roulette speeds lead to more damage (but cleaner beets), finger tines on the roulette are worse than grates, a tractor driving on a beet leads to a very high level of damage, etc. And we’re even starting to get in more and more data about the forces beets experience during harvest through innovations like the BeetLog (aka SmartBeet). But there are still a few gaps. Given I like the type of research that is simple and has high educational value, and am a big fan of bodging/ using things available in arms reach to get the job done, we’ve embarked on a series of trials that use a setup for measuring forces on cows feet, a mobile phone camera, and carbon paper. The carbon paper was actually the hardest to source.

“We’ve”. The first stage in the process is to do some basic tests using some extreme cases, while also testing the methods available. 2019 was a good year for this given we have some beets that we know have very different mechanical properties (some weak, some strong), and there’s a student available who has done more practical work on storage of sugar beets than basically anyone in Sweden. It was also a year when the owner of the equipment for measuring forces on cows feet was available.

The above video is of beets taken from a commercial field. The purpose of these videos was purely exploratory/ instructional. The beets were weighed and the contact time has been counted, but not the contact area. It’s probable that it is these beets we’ll show the video from, and it’s probably that future work will be based on these results, but this is not the real scientific part of the project in 2019.

Using three varieties of beets from a trial that is looking at other aspects of the mechanical properties of sugar beets, we’ve measured:

From these tests we hope to be able to draw conclusions about varietal differences in forces and pressures experienced during impacts, and how these varieties respond during storage to these different (and known) forces/ pressures.

If I had to have a guess as to what the statistical analysis will show, then:

How good are these guesses? We can’t actually answer that yet, but if you look at the poster below, you’ll find some other interesting results.

Madeleine took the work to the 2020 edition of the IIRB Congress. She managed to walk away with the prize for the best poster, including a big bag of chocolate. A link to the poster as a pdf is just below the Twitter embed, and on ResearchGate.

One thing we were able to add to the poster (besides the above video on loop – probably the real reason we won best poster) was data on a Large verse Small beet comparison. This was interesting. The bottom line was that larger beets experienced less pressure than smaller beets, when dropped from the height of 1m and landing on their side. The extra kinetic energy of the larger beets did translate to greater force at impact, but also a larger contact area. Given this larger contact area was greater than the larger force, average pressure was less.