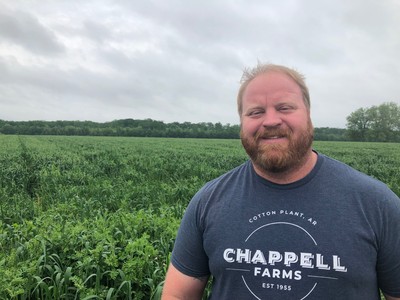 “Cover crops … took us from the brink of bankruptcy to a profitable enterprise today.”

Whether or not the quote is accurate needs checking, but the message is right.

Cover crops: Adam notes that cover crops are winning everywhere in their system: in floods, they protected the soil from washing; in droughts, they resulted in there being moisture (and crops) when there otherwise wouldn’t have been; input costs are lowered, which also means less risk; less irrigation (50%); less fertilisation (50%); less insecticides (60%); much less herbicides while also winning the fight against pigweed (this was the big one, and where it all started).

Plant populations: The other big change Adam had tried was reduced seeding rates. It was 50% reduction in cotton, with plans to go further. This reduction resulted in completely different expression of the crop, and ultimately a yield increase. In rice, the reduction was 75%. Yes, there have been weed issues, but he is working on it. These lower plant populations have meant much bigger root systems, which are really good at reaching nutrients, and thus there was no need to broadcast fertiliser – the roots would reach over to other rows to get any residual there. John mentioned the system of root intensification here.

Practice change: One thing Adam mentions is that every time he tries something that is not conventional, he is nervous about it. This is even after many successes. One goal he has in his enterprise is to get smaller so he can spend more time living – the changes to the system that result in greater profitability has meant this is realistic. He was also pretty clear on one message: don’t buy into the fear – bigger / newer / more is not always better.

There was a good deal of practical information in this episode, so if you’re a rice or cotton grower looking for some info on regenerative agriculture, this might be a good start.

Lessons for sugar beets in Sweden:

Cover crops: we know that they have great potential and we’re working on them.

Plant populations: We have pretty good information on yields and plant populations for sugar beets. It pretty clearly suggests that there is wide range ca 80-120 000 plants in which yield is pretty much equal. I wonder if it was the same for cotton and rice?