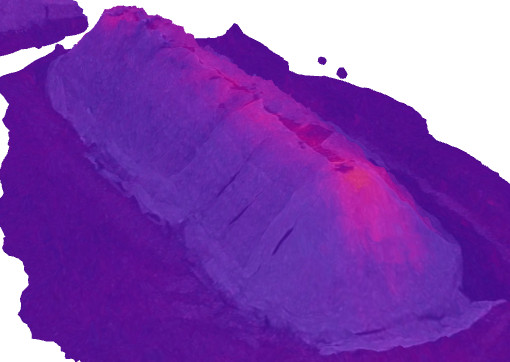 In the case with the solid (sugar beet root) surrounded by a fluid (the air), the rate of convective heat transfer is determined by:

These can be given as:

Combining these, and the units become W/m3. Multiply that by specific heat (energy needed to raise the material by one degree), you get the change in temperature per unit volume per unit time. Temperature divergence will be time and space dependent – constantly varying within a CFD model. Specific surface area and the heat transfer coefficient will be taken as constant.

The temperature divergence will be defined in the model. The specific surface area is described in another post. The calculation of the heat transfer coefficient for sugar beet is here described.

Where, kf = thermal conductivity of the fluid and Deq = equivalent diameter. So,

ONE AT A TIME…

In air, this is given as the constant 0.72. The turbulent Prandtl number of air is 0.90, but we’ll assume a laminar flow at the beet surface.

, where U is the superficial velocity, D is the diameter of the particle (= Deq), and

h=3.407 . This is thankfully a lower value than used previously.

h AS A SCALAR FIELD

Again, not large numbers, but there are two points to note.

ReD is pushing towards turbulent. We’re going to assume this away for now as velocities of 1,00 will be rate inside of the porous clamp region. If we did want to account for this, I believe a different correlation can be used; instead of 6, 1/2 and 1/3 as the coefficients in the Ranz-Marshall equivalence for Nu, different values can be used.

The second point is that at the given U values, the h values (increasing at a decreasing rate) are a whole magnitude of order larger at 0.50 compared to 0.01. From the previous simulations with 5m/s inlet air speed, velocity magnitudes of 0.01 and 0.30 were found in the one clamp.

CODING h AS A SCALAR FIELD

Of all the variables noted above, Deq, ReD and kf don’t already exist in the solver. h is defined within the solver, but as a fixed scalar. In the solver it has the name hsf (convective heat transfer coefficient, from the solid phase to the fluid phase). It needs to now be included as a scalar field instead.

DEFINING SCALARS IN THE SOLVER

Starting with these new scalar fields. In createFields.H, add in hsf and ReD to the list of other manually added scalar fields:

hsf needs to now be removed from the readTransportProperties.H file.

With the readTransportProperties.H file open, add in kf and Deq:

CALCULATING SCALARS IN THE SOLVER

hsf and ReD are fields as they change with time and space. The need to be computed for each mesh cell at each time step. A new hEqn.H file is created, with the following content:

A line to call this new file is added in clampPimpleFoam.C (the second and third lines here already exist).

NB: in a latter step in the development of this model, the calculation for Qr for TsEqn.H is updated to give a different functional form. This update is incorporated in this version of the solver on GitHub.

DEFINING THE SCALARS IN THE CASE

As hsf and ReD are now in the solver as input-out objects (IOobject) with the “must read” tags, they need to be defined in CASE/0. These files are in the case repository.

Getting very close now… Once the correct data for the cover permeability is sort, it’s just a matter of getting the time series for the inlet temperature and velocity in place and we can run a full test simulation on both the uncovered and covered clamps. Oh, and implement a variable time step (but that, I believe, is straightforward). Really, a full test simulation of the uncovered clamp is but a few hours away.